Around seven in ten people will volunteer at some point in their life. Of those, 22% will do it consistently. Cynthia, however, is a completely different story.

Cynthia Monks began volunteering for Guide Dogs in 1980 when her daughter asked for a dog. Her friends were already puppy walking, and she decided to go for it!

Cynthia did this 15 times – that’s 15 Guide Dogs puppies she has raised! 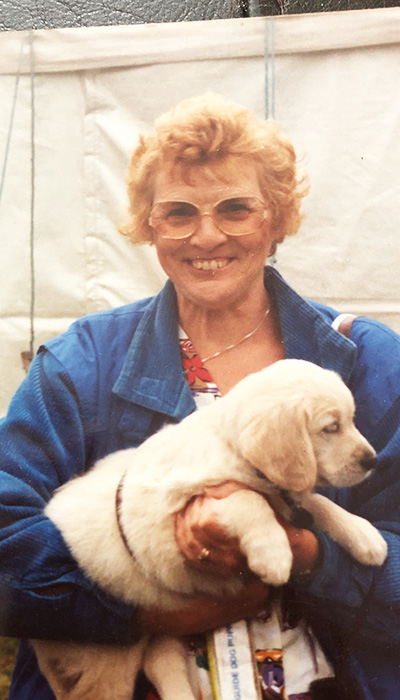 A Puppy Walker at Guide Dogs plays a vital role in the early stages of a guide dogs’ life; they take on a seven-week old puppy and are responsible for it until they are between 12-16 months old. The puppy needs to be cared for, socialised and trained in basics until it goes on to formal training.

Cynthia was also a volunteer Boarder and Brood Bitch Holder. She also went on to become a Fundraiser and a Merchandise Coordinator.

40 years on, Cynthia is now 87-years old and still joins local Puppy Walker Supervisor, Becky, to dog club. Although she no longer has a dog, Cynthia helps out by making the tea.

Becky said: “Cynthia is absolutely fantastic and everyone loves her. She’s been a volunteer for 40 years and has so much knowledge and great stories. She’s such a help to the other volunteers and is always happy to help. Volunteering as a Puppy Walker is an invaluable first stepping stone to enabling more blind and partially sighted people get out and about in the way they choose”.

Watching her Mum volunteer and support Guide Dogs for such a long time has had an impact on her daughter, Jo, who said: “Guide Dogs has been a part of me since the age of 11. I am now on my third stud dog and have had been a boarder in between”.

Cynthia has something to say to anyone who is thinking about volunteering: “Just do it!"