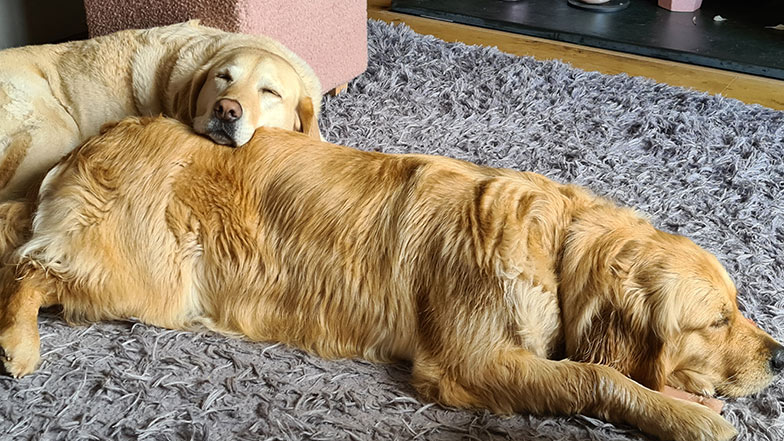 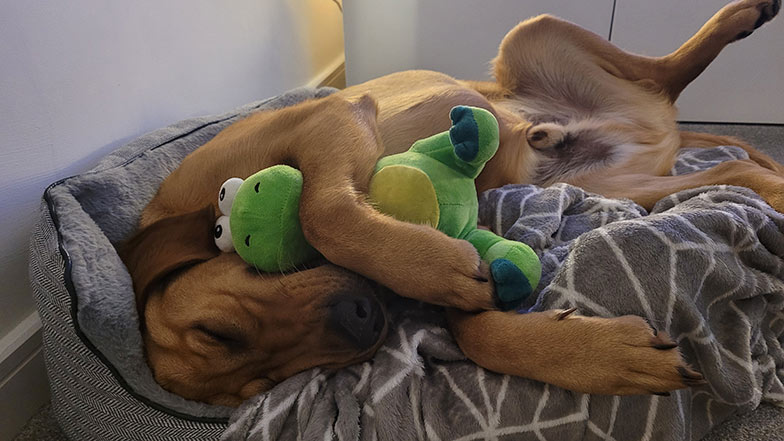 Guide Dogs is raising awareness of the importance of sleep in the development of the nation’s puppies – encouraging midday siestas and a calm and quiet environment to relax in.

New research has uncovered the most common positions our canine companions adopt for some shuteye – and the cute and sometimes embarrassing antics that go with it.

Pet dog owners were asked about the dog’s sleeping behaviour and the most common sleeping position is for the dog to be curled up (71 per cent), while 57 per cent lay on their back with their legs in the air.

Owners also revealed where their dogs liked to get their sleep – two thirds sleep in the dog bed, while one in 10 dogs has been found sleeping in a washing basket.  While most (73 per cent) said they were baffled by some of the sleeping positions they find their dog in, for the most part their dogs are like clockwork, with two thirds saying their dog wakes up at the same time each morning.

Dr Helen Whiteside, Head of Research at Guide Dogs, said: “We’re a nation of dog lovers and our pets are part of our family. Sleep is incredibly important for a dog’s mental wellbeing, and it plays a significant role in learning and memory, which is why as part of our training at Guide Dogs we let our trainee guide dogs have a midday siesta.

“There are lots of things that owners can do to help their dog get some good quality shut eye.

“Dogs love routine so it’s important for your dog to have a calm quiet space with a comfortable temperature to sleep in. For puppies and younger dogs, getting the foundations right will help support the development of good long-term sleeping habits.”

When they do nod off, three quarters (75 per cent) of dogs appear to be in a deep sleep dream as they make strange noises and perform a static running action. More than half (58 per cent) of dogs randomly let out a proper bark when they are sleeping.

The research revealed a lack of education about dogs and their sleeping behaviour among Britain’s dog owners – just a third said they looked into how much sleep their puppy or dog should have.

We all love our dogs, but more than half of people admit they should educate themselves more on dogs and their sleeping patterns to ensure they're living a healthy life.

“To help our dogs get the best possible sleep it’s important to give them a choice, not only in where they sleep but the type of bed they chose to sleep in – some dogs will prefer certain types of beds, while others will opt for no bed at all.

“It’s also really important to recognise that when a dog is in a bed it should be like a ‘do not disturb’ sign as, just like some people, some dogs can be grumpy if they are suddenly woken up from a deep sleep.”

Guide Dogs has expert advice for making life with your dog a walk in the park.

Find out more about our expert guidance with Good Dog!