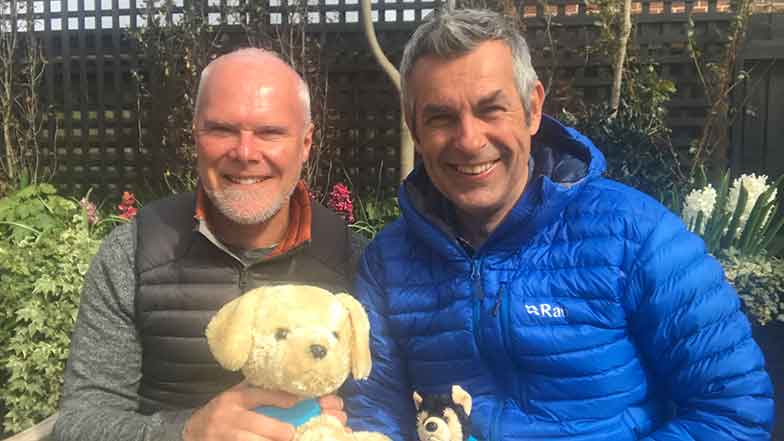 Politics In Art: ‘The Arc Is Long’

This year sees the 50th anniversary of the UK’s very first Pride March in 1972, and the team at LGBT+ History Month have chosen art as this year’s theme.

‘The arc is long’ quote, being used as LGBT+ History Month’s tagline, is taken from Dr Martin Luther King Jnr’s quote: “The arc of the moral universe is long but it bends towards justice.” 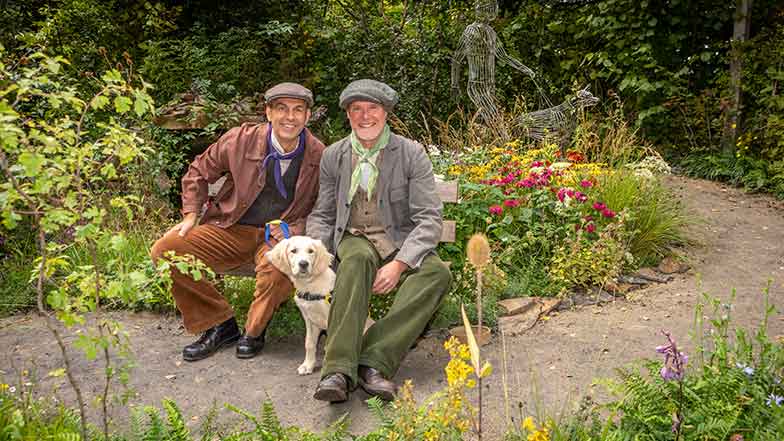 Below they talk about working with Guide Dogs, the importance of art, why LGBT+ History Month is important to them and some of their most memorable Pride moments…

Tell us a little bit about yourselves, how and when did you meet?

Adam and I have been involved in horticulture and around plants for all our lives and describe ourselves as ‘hands in the dirt’ practical gardeners first as well as garden designers. I’m a farmer’s son from Kent with a particular interest in wild plants, and Adam started out as a Saturday boy in a nursery in Essex in the early eighties, so he has a very wide horticultural knowledge.

As well as numerous Royal Horticultural Society (RHS) Show Gardens, we’ve also designed gardens for all sorts of clients ranging from an eccentric botanical courtyard in London’s Marylebone for a fashion school to a formal garden for a chateau in France and everything else in between.

We met in 1997 through my best friend Helen at university. Adam was her best friend from her hometown in Bishop’s Stortford in Hertfordshire and after a weekend when I popped down to see her, we all got together with friends in a pub and after a bit of flirting, we realised we had a lot in common, especially our love of plants. It happened quite quickly and we moved in together a couple of months later. We’ve now been together for nearly 25 years. We had our civil partnership on my 40th birthday in 2010 and as soon as the law changed, we were able to convert this to marriage.

In the early days, we decided to combine the experience and expertise we had forged from our different backgrounds and have never looked back. Since then, we set up our garden design business which allows us to indulge in our passions of creating gardens and putting plant combinations together. I tend to do most of the design drawings, Adam puts together most of the plant lists, and we both decide on concepts etc. I wouldn’t say that the balance always comes naturally; you have to compromise and work hard at it, but generally we are very happy in each other’s company and work well together with few arguments!

One of our happiest and most memorable moments of our life together was at our first ever Chelsea Flower Show. It was back in 2006 and we had been shortlisted but not given space to exhibit, so we thought it was over. Luckily someone dropped out and we were given the opportunity, but it was the end of February/beginning of March and we had only 12 weeks to bring everything together. It was incredible, it all came right. The medals were awarded, we thought ours was a bronze, it turns out it was gold. We hugged and hugged and broke down in tears. Professionally, it was the biggest high we’ve ever had. One of the happiest moments of my life (and Adam’s) and to share it with my husband was AWESOME.

The garden at Chelsea was lovely and incorporated so many elements that celebrated our 90 years. From planting and design that could be enjoyed by people with sight loss to making it dog friendly – how did you manage all of that?

As with all of our Chelsea gardens, everything is in the planning. You have to decide on what you want to achieve and then work out how you’re going to do it. Chelsea is the most prestigious gardening show in the world, so every detail has to be meticulous. Our vision for the Guide Dogs 90th Anniversary Garden was to create a space that highlighted the journey somebody takes from first losing their sight, and the feelings of fear and isolation that that brings, to a place where they can experience a more confident existence, full of joy and freedom, liberated by their guide dog. To illustrate this story, we decided that we had to use sculpture so we designed two figures. The first was of a WW1 veteran, seated in despair and isolation, made out of rusty barbed wire to gave a moody, nostalgic feel. The second sculpture was of a person standing upright and striding out confidently with their guide dog by their side, now ready to lead the life that they choose. We needed the garden to be simple and thought-provoking, but it was also vital that it could be enjoyed by vision-impaired people as well as people lucky enough to have their sight. This is why we included lots of plants with sensory elements. There were colourful flowers in contrasting bold colours, as we learnt that lots of people with vision impairments can still appreciate some colours especially when planted in large blocks - especially yellow flowers. We also had apples, pears and strawberries for taste, fragrant herbs for smell, and wonderfully soft, tactile grasses for touch. As well as having important sensory elements, the plants also had to have two other functions. It was important for us that every plant variety in the garden would have been around in the 1930s which is when the garden was set. So no new varieties, only old-fashioned plants! Secondly, they also needed to be as dog-friendly as possible. We did set a bit of a challenge for ourselves and it took a lot of research and many trips to nurseries and suppliers to make sure the plants were perfect.   With Chelsea you have to push yourselves, there is no second best

What do you enjoy most about being artists and designing gardens?

We are very lucky that designing gardens has allowed us to indulge in our passion for plants. We’ve always been artistic and creative, and to have the opportunity to design and bring to life a garden that you’ve planned on paper is amazing. Seeing the client’s reaction to the finished garden is always one of the most rewarding things, especially when you know it will make a real difference to their lives. Last year’s garden for Guide Dogs was by far the most satisfying garden we’ve ever done. It was an absolute honour to stand by the garden and meet so many inspiring people, some of whom were moved to tears. If we can do that with a garden that we have created, knowing that something that you have done has touched someone so deeply, that’s incredibly humbling. As I said earlier, sharing these moments with the one you love most in the world is what life is all about.

What artists inspire you?

Not surprisingly, we both love the work of artists known for their floral work, especially Claude Monet. We totally adore his paintings of waterlilies at his water garden at Giverny in France. They’re soft and subtle, and have impressionist colours with an informal, flowy feel. Often, they’re light, full of bright whites and pastel colours. It’s quite a nostalgic, romantic feel that we also strive to achieve with our gardens. We always say that a garden should always be felt was well as seen. We also love the more vibrant tones of Van Gogh with his irises and sunflowers, great for inspiring hot summer gardens. I also particularly like some of the more contemporary large floral work of Georgia O’ Keeffe, especially her beautifully simple painting of white jimson weed (a wild plant that doesn’t grow here in the UK but is a form of Datura or thorn apple). Painting aside, I think we are also particularly interested and inspired by sculptures, especially when used in a garden setting. A sculpture can help tell a story or just give a focal point of interest. Where we used to live in Hertfordshire, we were only a few miles away from The Henry Moore Foundation, which showcased his studio and his work, and so we got to see some of his amazing organic sculptures. Sculptures work best when displayed amongst wild and rural landscapes. One particular Henry Moore sculpture sticks out of a giant bronze sitting in a meadow surrounded by sheep. We’ve used rustic metal sculpture quite a bit recently, especially in our last two Chelsea gardens, although a fraction of the size.

Do you feel that art is accessible for everyone?

Definitely think that art, in whatever its form, is accessible to all, or at least it should be accessible to everyone. There’s something for everybody, not just mainstream art. Art is all around us, not just in the big London galleries. It should certainly stimulate every sense, not just sight. Take a sculpture: you can often get more out of it and understand it if you feel it, not just see it. This is certainly the case with plants too, especially large trees when you touch and feel the bark. Not just sensory, tactile art but also auditory or hearing mediums to help people with sight loss to also appreciate and get something from it.

What are your thoughts about LGBTQ+ representation in art?

I think that LGBTQ+ representation in art is getting stronger and more centre stage, pushed forward with openly gay artists such as David Hockney. The key is not having to hide your sexuality but celebrate it, you can certainly express more of yourself when you aren’t supressing part of it. I remember seeing the contemporary, almost shocking works of Gilbert and George for the first time back in the 1980s and thinking ‘wow, look how far we’ve come’.

Why do you think LGBT+ History Month is so important?

It’s so important to promote and celebrate diversity and equality. Society has certainly come a long way from when we were young in the 1980s and 1990s, when we were discovering who we were and who we wanted to be. Back then, so many of us were afraid to come out as gay for fear of being tormented, abused or worse. As with so many things education continues to be key, as well as visibility and positive role models. LGBT+ History Month is vital to ensure we keep moving forward as a society and that everyone is valued, supported and respected, not just tolerated.

This year is the 50th anniversary of Pride – why do you feel Pride is important and what does it mean to you?

We’ve come a long way in 50 years and Pride is as important now as it ever has been: an affirmation that gay people are just as important as everyone else. It tells gay people and educates others that it’s totally fine to be gay and you can celebrate it. Pride is always a positive, fun and celebratory event, lifting people up and supporting them to be whoever they want to be. Here’s to another 50 years!

Thank you to Jonathan and Adam for their support.