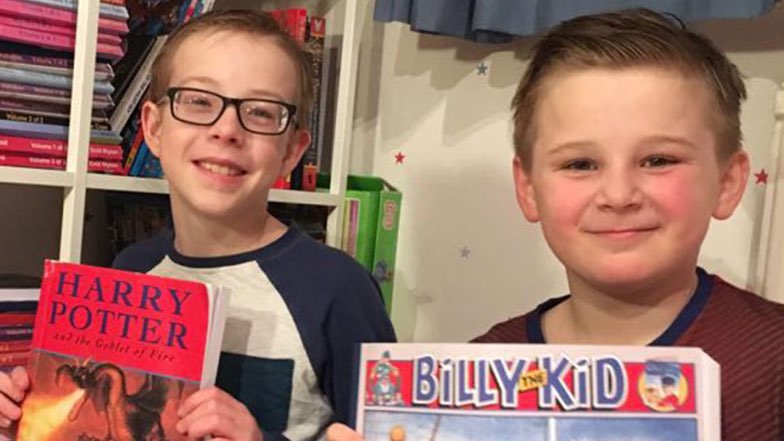 When asked if Fin had always enjoyed reading, his Mum, Nicky replied: “He didn’t really like reading because he couldn’t get books that he was able to read easily.”

Fin’s eye condition meant that he couldn’t really see other children at playtime, having to distinguish them by their coats.

When asked how he found reading at school and home before discovering CustomEyes, Fin replied: “It was really hard, it felt like I wasn’t the same as the others in my class, as they could all read the normal books and I couldn’t.”

Fin’s school tried to help by printing out A4 sheets of paper with enlarged font, but he found these cumbersome, with the paper getting easily damaged or lost. The school also provided Fin with a magnifying glass to read the sheets, but this was difficult too.

Exploring other options, Fin tried using an E-reader, which could only fit two words on a page at a font size that Fin could see. “It was okay to start with,” says Fin, “but then it got harder. My eyes got strained and really tired.”

With Fin and Nicky both becoming frustrated, they went to their local council’s vision support service, who then suggested CustomEyes.

A quick Google search later, and Nicky had signed up to CustomEyes, ordering several variations of different fonts and sizes to see which would work best for Fin.

Nicky says “We then found out he was never a reluctant reader before, he just didn’t have the right tools.”

After using CustomEyes large print books, Fin hasn’t gone back to any other methods of reading. His favourite CustomEyes Books include the Harry Potter series, Roald Dahl (especially Charlie and the Chocolate Factory) and, his particular favourite, Wonder by R.J Palacio. "I could read them myself without any help and started liking reading! It’s like you’re in a different world!

Nicky regularly reads to Fin at bedtime to encourage his love of reading – and even his little brother wants to get in on the action now.

CustomEyes large print books also give Fin the independence to enjoy his favourite stories by himself: “It’s good when I can’t sleep, I can just grab one off of my bookshelf until I get sleepy,” he says.

Nicky says of CustomEyes: “They’re not any more expensive than the standard book, which is great when you think how much more goes into them.”

When asked how Fin is finding school now, Nicky replied “He can completely keep up. Finding CustomEyes Books has helped in terms of vocabulary and will put him in good stead for high school.”

As well as his love of reading, Fin is growing in confidence – now taking piano lessons, learning to read Braille and attending theatre club.