When Guide Dogs re-opened its buddy dog service for children in 2020, Suzanne thought a dog might help her son, Jago, aged 10, who has anxiety linked to his vision impairment. When yellow Labrador, Sam, joined their family in June he instantly became Jago’s best friend, giving security and companionship that has completely transformed their lives. Here, Suzanne shares their story. 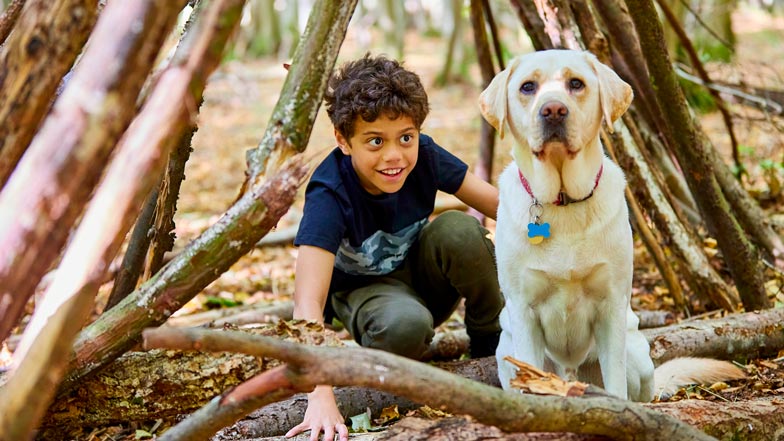 “Jago was five-years-old when I started to wonder if there was a problem with his sight. He’d always struggled to see in dim light, and I assumed that was normal. But in winter, when the days got shorter, I noticed he would stand still when he got out of the car after school or run his hands along the car or house to the front door. He also began to panic if he couldn’t see me, unless I was standing under a bright streetlamp.

“In 2016, after a series of eye tests, Jago was diagnosed with RP (Retinitis Pigmentosa). It was a complete shock. There was no support in place for us and I’ve worried about him every day since.

“When he asked me what the doctors said, I knew I had to tell him the truth. I told him that something wasn’t working in his eyes. Jago has always wanted a dog, and his first response was – “Will I need a guide dog?”. When I said yes, maybe one day, he said “Haha, and you said I couldn’t have a dog, Mum!”

“Jago doesn’t know what other people can see, so he doesn’t know to tell me when he can’t see something. In fact, he’s never wanted to talk about his vision impairment, to me or anyone. RP is a progressive condition, and I can always tell when his vision takes another dip as his anxiety goes up.

“I first heard about buddy dogs from Guide Dogs when I searched Google after Jago’s diagnosis. We were really keen as Jago has always wanted a dog, but at that time Guide Dogs weren’t matching any new buddy dogs. Jago kept asking me to keep checking, and when I looked again just before Christmas, we saw that the service was open again! We applied straight away.

“When we brought Sam home in June 2020 the difference in Jago was instant. I was worried that I was expecting a dog to change everything, but I can truly say that he has. Up until we got Sam, everything connected to Jago’s eye condition has felt negative, but Sam has been a huge positive. Jago is so proud of him.

“For the first time in years, Jago is now able to talk about his sight, through talking about how his buddy dog from Guide Dogs helps him. He used to always say how he felt unlucky that he couldn’t see or that I was an unlucky mum. Now he says he’s the luckiest boy in the world, because Sam is his dog, given to him because of his vision impairment.

“Jago is connecting with his friends again and has had his first proper conversations with his grandparents. The other day my mum passed him a yellow balloon and he told her that he needed a blue or pink balloon as he couldn’t see yellow. He wouldn’t have ever spoken about his vision like that before we got Sam.

“For the first time, we’re now able to go out without a battle. Jago knows that Sam wants to go for a walk, and he wants Sam to be happy. People in the street didn’t understand that Jago couldn’t see very well, but now people can see his buddy dog and Jago is open to talking to them about Sam, because he’s so proud. Sam is so calm, gentle and well-behaved that we can be confident to take him anywhere with us.

“Jago has always been particularly anxious at bedtime. He hates the dark at night and sleeping in his own bed. Bedtimes were always late and stressful. Now, Sam sleeps in Jago’s room, on his bed. They share a pillow! I’ve had my bed to myself for the first time in years and knowing that Jago feels calm and safe with Sam beside him is a huge relief.

“We also benefit from the regular walks and the routine of having a dog. Walking Sam daily is a motivator to get outside in the fresh air, which is really good for me.

“This summer we went on our first camping trip. Jago would never have considered camping before, but he wanted to go as he knew Sam would have a good time. Jago joined in and went fishing and toasted his own marshmallows on the fire, with Sam beside him. 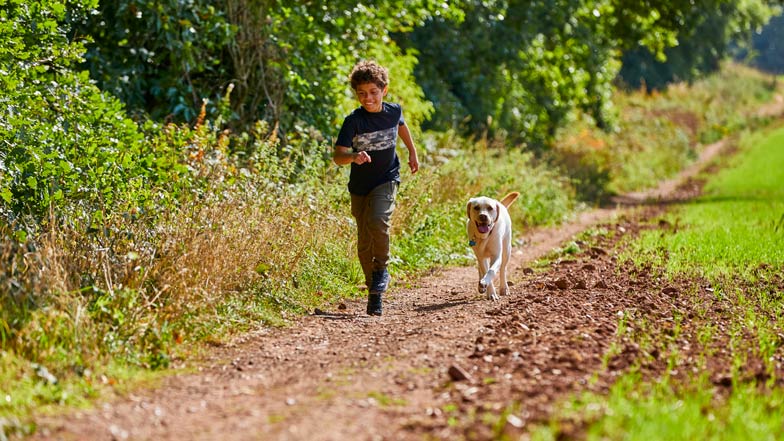 “Next week we’re back to school and Sam will walk Jago to the gates. He hasn’t been to school without a meltdown in a year, but he’s had three settling-in sessions already that have been fine. He’s been telling his teachers and classmates all about Sam. I’ve promised him that in a few weeks I’ll bring Sam into school so everyone can meet him.

“Things are really looking up and I’m hopeful about the future. Jago used to enjoy playing rugby so I’m hoping he might want to start going again and get back into it. And I know he’ll feel more confident there with Sam watching him from the sidelines.

“For me, Sam has lifted a huge weight off my shoulders. I’ve had huge amounts of worry, but now I know Jago is happy and feels safe with Sam beside him.”