For 25 years, Paul enjoyed a colourful career as a Creative Director. He was passionate about his work and loved every moment. However, he lived with the knowledge that he would one day lose his sight, after being diagnosed with a degenerative eye condition at the age of 21. At the age of 50 he made the difficult decision to retire after his vision deteriorated, ending his beloved and creative career. 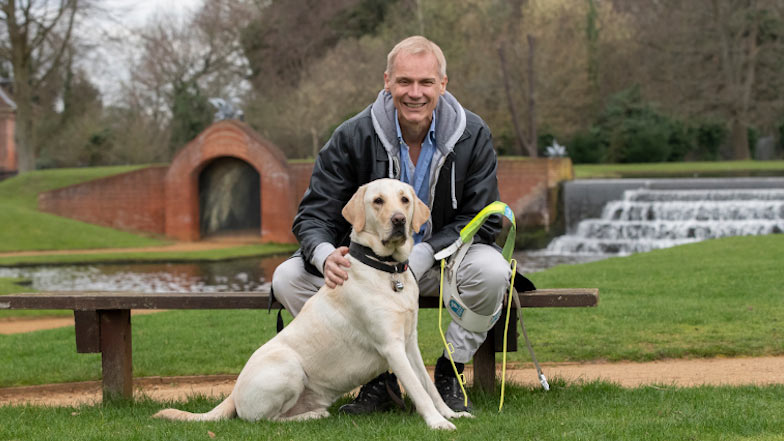 While Paul adjusted to his new life as his vision deteriorated more, a new eager trainee was introduced to our Sponsor a Puppy scheme in May 2017. At only six weeks old, Bolt and his fellow sponsor pups Libby and Farah began to embark on their training to learn all the skills they’d need to become qualified guide dogs.

As Bolt progressed through his training, he was followed on his journey by many sponsors, who all supported him every step of the way. His sponsors were delighted to see him develop with his Puppy Walker Lesley, and Sam and Laura, his trainers. They followed along as Bolt overcame his eagerness to make friends with other dogs and adored his cuddly nature – but they all were waiting to see who would have their life changed by Bolt. 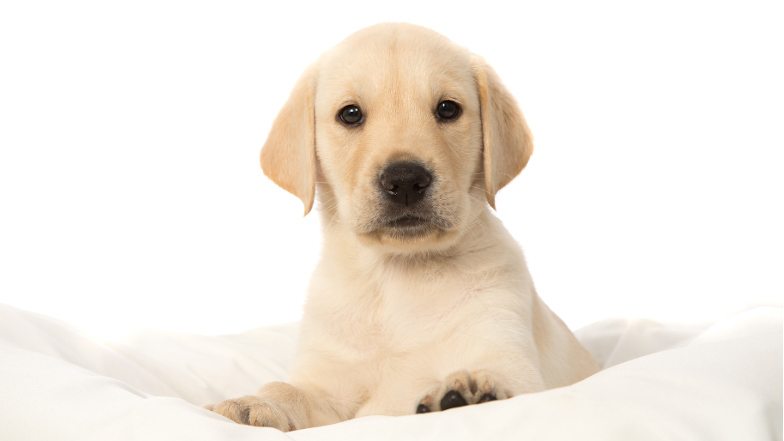 Although Paul was able to spend more time with his family, his vision continued to worsen, and he missed the simplicity of being able to go out into the world around his home unaided. He reached out to Guide Dogs to find out what options he had, and after some time on the waiting list, Paul was introduced to Bolt for the first time. They qualified as an official guide dog partnership in November 2018, and since then have been joined at the hip!

When Paul lost his sight, he felt hesitant and unsure of himself without the support of another person. But since he met Bolt, he has regained his confidence and feels that there are no barriers. “My biggest surprise was just how supportive people are,” Paul said.  “With Bolt, they actually see me now – staff will offer help and even stop escalators for me.” Bolt also inspired Paul as he worked with the Paralympic Agency on the early stages of their advertising campaigns.

Thanks to Bolt, Paul has got back the freedom he had longed for, and he trusts entirely in Bolt’s abilities. 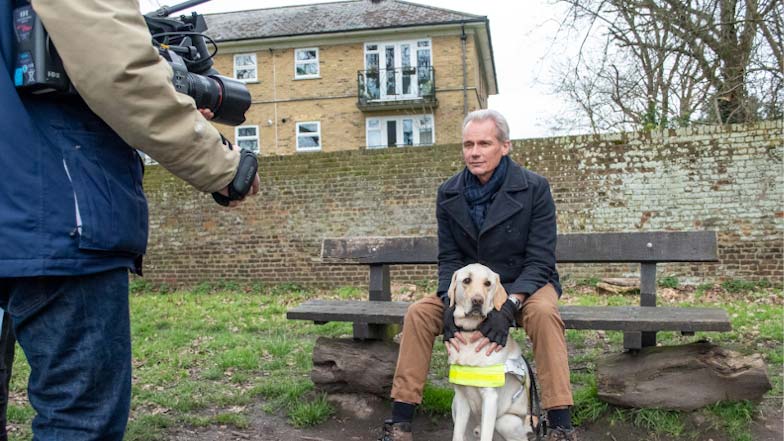 When production started on the 2020 Sponsor a Puppy TV advert, Paul and Bolt were the ideal choice to star. With Bolt as a graduate of the scheme himself, it gives his sponsors the perfect final update on their story, and with his experience as a Creative Director, Paul was excited to be on the other side of the action:

“I’m a beneficiary of the generosity of so many, and I feel like this is a very small way of me giving back. This relationship between me and Bolt has become a lifeline”.

Sponsor a puppy like Bolt and help them on their journey to become a qualified guide dog.