Non-visual strategies and using your other senses

Using visual strategies to help you in everyday life may not be the most appropriate approach for you – perhaps because you don’t have enough residual vision or because what remaining vision you do have fluctuates too much.

There are plenty of non-visual strategies that you can use that will help promote your independence, for example using a mobility aid like a white cane. This can help you to detect objects and hazards and can also alert others to your vision impairment -  they should know to move out of your way and understand if you’re unable to move out of their way. You might also consider using one of our volunteer sighted guides.

Read on for more about non-visual strategies that you can try, including strategies for using your other senses.

Using touch to help identify places or objects, or to guide you when you're moving around, is perhaps the most obvious and straightforward skill to use if you have reduced vision. There are also skills and strategies that you can learn to make finding and identifying things through touch easier.

Using your sense of touch actively is known as a ‘haptic skill’ - which simply means using touch to understand information. Some examples are using Braille, picking up surface changes through your feet/cane, following the change in direction of a handrail, or interpreting feedback from a mobile phone.

If you’re searching for something that you can’t find, for example on a work surface, try using a systematic search technique. Or if you’ve dropped something on the floor, follow our tips for searching for a dropped item.

There’s a range of listening skills that you can develop and work on, either on your own, or with the help of a professional such as an Orientation and Mobility Specialist, Habilitation Specialist (for children and young people) or Rehabilitation Worker (for adults). These include:

You can use sound in a very similar way to vision to help with orientation. For example, you can use familiar sounds such as the noise of the tills in a supermarket, traffic lights beeping in the town, people talking outside a café or music from a shop to help orientate yourself.

You can practise tracking moving sound sources in your garden or when out and about. Practise listening to one person or car and track the sound from in the distance, to getting close, to going away from you.

Then try tracking two sound sources, such as two cars travelling down the same road. Follow both sounds (turn your head in the direction they’re coming from) and then estimate the gap between them. When you’re walking along a pavement, listening to the noise of people talking/walking towards and then past you is a good way to stay oriented.

Picking out a particular sound

In a noisy environment, you can listen for a sound amongst a sea of other noises and use it to help orientate yourself. Pick out a noise, home in and focus on it, and use it as a landmark or move towards it. For example, if you’re in a café with lots of people chatting, that might be the noise of the hand dryer in the toilets, a coffee machine or till. Or you might be in a noisy shopping mall and faintly hear the sound of an advert playing in a nearby store that you want to get to - focus on that over all the other sounds and walk towards it.

Developing these skills can be tricky when you’re having to concentrate on other skills to get around safely, so you might want support from an Orientation and Mobility Specialist, Habilitation Specialist or Rehabilitation Worker.

A sound shadow is created where a sound is blocked by an object. It can help you with orientation and with finding landmarks on routes, and also with knowing where it’s safe to cross a road. For example, you may be walking along a path and not be able to see the bus stop, but you can hear the sound of the traffic being blocked by the bus shelter, or there may be a lorry parked in the road and it’s blocking the sound of the other traffic. Tall buildings can create sound shadows and you’ll hear more noise in any gaps between the buildings.

Echolocation can be a useful tool to help you when moving around, whether you’re inside or outside. It’s where you use either your long cane or add your own sounds by clicking your tongue, fingers or a clicker. The time it takes to hear the echo determines the distance between you and the object off which the echo bounced. The longer it takes for you to hear the echo, the further away the object is. You’ll know when you’re approaching or near the object as the time to hear the echo gets shorter.

You don’t necessarily need to be an ‘active echolocator’ – making the sound yourself. You can also be a ‘passive echolocator’, not making a noise, but still using the feedback from sounds reflecting off objects.

The sound of an echo will be affected by whether you’re inside or outdoors and also by what the building or object off which the echo is bouncing is made of. The speed of the echo can also be affected by the weather – sound waves travel more quickly on a hot day, which means you might think an object is closer to you than it really is. It's important to be aware that echolocation does not inform you of steps, kerbs, surface changes etc, for this you will still require your long cane.

If you’re interested in finding out more about echolocation, have a look at these websites:

RNIB: Navigating the world using echoes
Audiobooks: Beginner's Guide to Echolocation For the Blind and Visually Impaired
Durham University: Discovering how humans can see with sound

Olfactory means using your sense of smell, which can be really helpful at home. For example, the smell of flowers in a hallway might give you a clue about which door you’re at. It is also important in your own personal care and in daily tasks such as cooking.

Your sense of smell is also helpful for when you go out. For example, if you’re walking in the town centre, you can often recognise which part of the street you’re on or which shop or café you’re outside by the smell – which might be things like coffee, bacon or perfume.

Using your sense of balance and spatial orientation. This is an unconscious ability but it means, for example, that you instinctively know whether you’re going up or down in a lift because of the feeling it gives your body. It can also be useful when you’re navigating your way around somewhere as it can help you know whether you’re turning left or right, moving up or down, etc.

Using your sense of body awareness and positioning

This can be something you do unconsciously, for example knowing where to reach for a light switch, even if you’re unable to see it, or using upper and lower body protection to help you move around somewhere safely.

Apps such as Google maps or Soundscape can really help you find your way around when you’re out and about. There’s also Seeing AI, a free app that describes the world around you. It uses artificial intelligence (AI) to describe nearby text, objects and people and can also help identify products using a bar code scanner.

If you’re looking for some immediate help when you’re out, another alternative would be for you to video call someone you know using apps such as FaceTime, WhatsApp or Facebook Messenger. If there isn’t someone you can call, or if you don’t want to rely on people you know, you could use another app called Be My Eyes.

Be My Eyes is a free smartphone app that connects people with sight loss to sighted volunteers. It uses the internal camera on your phone to capture a live view of what’s around you and shares that with a volunteer. The volunteer can then ‘be your eyes’ and support you with a wide range of everyday tasks and situations. 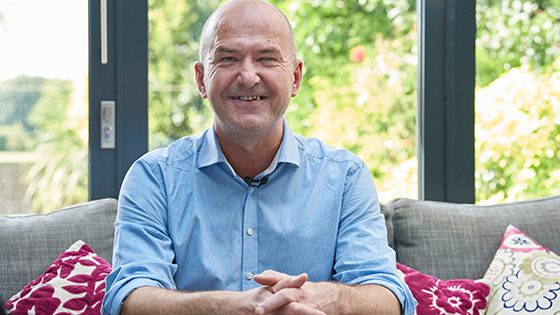 If you need support with any technology aids, please email our Technology Services team at